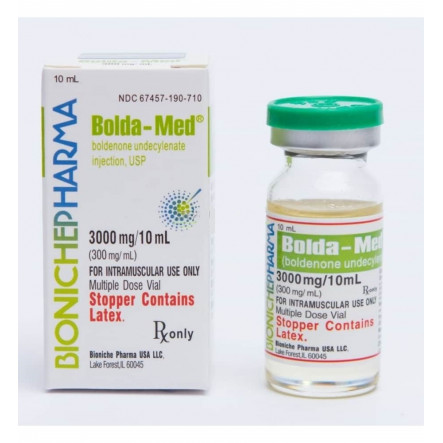 If you need a quality steroid with anabolic and androgenic effects, then Bolda-Med (boldenone), produced by the well-known company Bioniche Pharma, will be an excellent choice.

This drug is produced in the form of injections, and the main active ingredient in its composition is boldenone undecylenate, which is an analog of testosterone obtained artificially. Its main difference from the "original" is a powerful anabolic effect and a weak androgen factor. At the same time, it should be emphasized that some scientists consider testosterone to be the best anabolic in comparison with boldenone.

After the chemical formula of boldenone was derived, it began to be widely used in the field of veterinary medicine. This is explained by the fact that initially scientists wanted to develop a powerful analog of methandrostenolone, but received a substance that has a similar chemical composition and completely different properties.

If we examine a boldenone molecule under a microscope, we can see that it lacks one of the methyl groups. As for the activity indices, the anabolic is 100, and the androgenic is 50. The substance is not considered toxic, therefore it is not capable of disrupting the liver. Despite this, it is better for athletes taking part in competitions to refuse to take Bolda-Med, because this steroid is easily detected in the blood, which will lead to disqualification according to the results of a doping test.

Injections of the presented drug allow:

How to use it?

It must be said right away that boldenone should be taken only by athletes who have crossed the 18-year mark and have no contraindications. As for the dosage, it is selected individually, but usually, it is 200-600 mg per week. The same applies to the duration of the course when determining which many factors are taken into account, among which the goals set, physical indicators, experience in other steroid cycles, etc. should be highlighted. In such a situation, it is best to consult a specialist.

After the course has ended, and from that moment 14 days have passed, you need to conduct a PCT. In this case, it is worth giving preference to testosterone boosters, which, in one month, will normalize the rate of natural testosterone production. If you want to get the most out of taking Bolda-Med, then during the course you should follow a diet that will include foods designed specifically for bodybuilders.

Often, boldenone is taken with other steroids that have anabolic and androgenic effects, such as Proviron, testosterone, and tamoxifen. By supplementing the course with one of these drugs, you guarantee yourself an excellent result and minimize the likelihood of side effects. If you want to “dry out”, then it’s better to stop at Winstrol, Proviron, or tamoxifen.

A word about side effects

Considering the chemical formula of boldenone, you can see that certain carbon atoms are connected through a double bond. This gives the described steroid a huge advantage in the form of a slow aromatization process. In this regard, injections of the drug cannot lead to swelling, gynecomastia, and increased blood pressure. This suggests that Bolda-Med Bioniche will not harm women's health. In addition, one of the main features of the presented substance is low androgenic activity, which indicates a minimal risk of virilization. From here it will not be difficult to conclude that Bolda-Med is safe, and is optimally suited to start acquaintance with steroids with it.

Bodybuilders who have felt the effect of taking boldenone on themselves write that they gained muscle mass without much difficulty and did not lose it. There are no opinions that the drug worsens well-being, but some mention that they expected more from these injections.

Some of the reviews were left by representatives of the weak half of humanity. All of them are written positively. This once again proves that Bolda-Med is not able to provoke virilization.