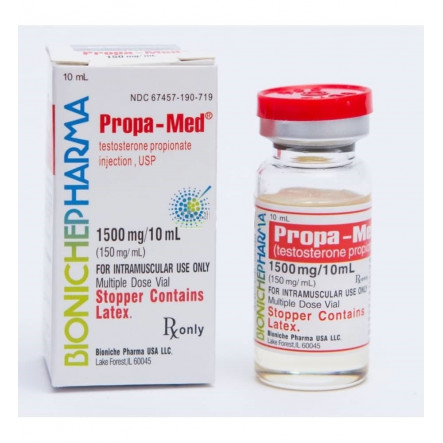 This drug, called Propa-Med or (Testosterone Propionate), is an analog of the natural main sex hormone in men.

Just because of this hormone, males and females differ from each other. The distinctive side of the natural form of testosterone from the form of propionate is the duration of action. So, for example, the male sex hormone produced by the body acts for one to a maximum of two hours, and the drug Propa-Med creates an effective concentration of the active ingredient for one, and sometimes two, days in a row. By themselves, the properties of this drug are not particularly different from the natural substance.

For the fairer sex, this drug is not recommended, since there is a high risk of symptoms of virility and masculinization, when a woman, both in appearance and in the composition of hormones, becomes similar to representatives of the strong half of humanity. Testosterone propionate quickly undergoes aromatization in the blood, as a result of which it is imperative to monitor the level of estradiol in plasma and regularly take drugs that inhibit the aromatase enzyme. One such substance is anastrozole.

While taking Propa-Med, the following effects are observed:

The duration of the course of taking Propa-Med - 100 is from 2.5 to 3.5 months. For the effect to be sufficient, the minimum weekly dose should be 150 milligrams, the maximum - of 1 gram. If you take more than a gram per week, then the risk of occurrence, or aggravation of existing side effects, increases significantly.

Taking the drug is recommended both for athletes who want to quickly gain a large amount of muscle, and for people who want to get rid of extra pounds of fat as quickly as possible. The difference here lies in the number of calories consumed in parallel with taking the drug - if there are a lot of them, you will gain weight, if a moderate amount, then excess fat will be burned. In parallel with this, you should definitely take a drug belonging to a number of aromatase inhibitors in order to prevent side effects from excess estrogen, which occurs due to a compensatory increase in the amount of estradiol.

Almost all reviews of professional and novice athletes about this drug are positive. In the male body, testosterone is absorbed very well, very rarely causing side effects with the correct regimen.

But, this does not mean at all that the athlete should not monitor his condition. The delivery of tests should be regular, it is also necessary to periodically undergo medical examinations to monitor the condition of the body. Negative reviews about the substance only indicate the wrong, excessive use of Propa-Med, which should not be allowed in any case.