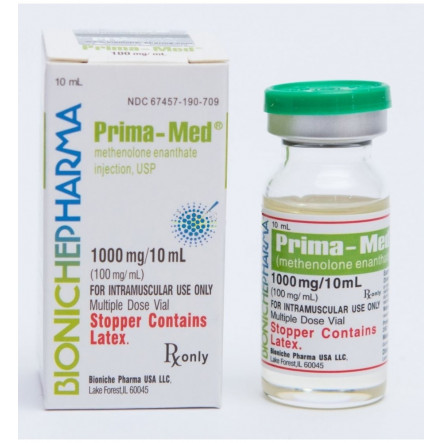 A steroid called Prima-Med (Methenolone Enanthate) is manufactured by Bioniche Pharma. It has a "soft" effect and is used by athletes during the "dry" period to ensure the preservation of the gained muscle mass and create relief.

Prima-Med is produced in the form of tablets and injections. The active substance of this preparation is methenolone enanthate or acetate (tablet and injection forms, respectively), which has a weak anabolic (88% of testosterone) and androgenic (44% of testosterone) influence. It is not dangerous and does not undergo the aromatization process. Prima-Med is recommended to novice athletes as the first steroid preparation. You can buy Primobolan from Bioniche in Slimcat Pharmacy.

This preparation has the following parameters:

The main advantage of this product is that it does not convert into estrogen. Its use does not cause swelling or gynecomastia. By its action, the preparation is more needed in a period of dryness, and not when gaining muscle mass. This is evidenced by the reviews of athletes who wanted to gain muscle mass.

The dosage of the drug depends on its form of release:

The dose of the injection form is equal to 400 milligrams, used 1 time in 7 days, the post-course therapy must be carried out 3 weeks after the last injection.

Athletes often ask: «How to use Prima-Med together with other steroid drugs, because it has a weakly expressed anabolic effect?» Specialists consider that the most suitable course of preparation during the period of muscle mass gain is in combination with nandrolone, testosterone, methandrostenolone, and Sustanon. During the dry season, it is better to supplement Prima-Med with Winstrol. I'm making a combined course, they don't recommend using more than 2 steroids at the same time. Both of the tools used are best used in a dose of ½, which will allow increasing their effectiveness, and also reduce the probability of the appearance of side reactions in the body.

Adverse reactions after the use of this steroid preparation

Prima-Med is considered a safe oral steroid, which gives side effects quite rarely. If you take it solo in the doctor's prescribed dose, then there will be no side effects at all. The drug does not affect (at least, apparently) its secretion of testosterone. Gomon with a long course of taking this steroid and a dose equal to 40 milligrams becomes reduced by two, but it recovers to 100% after 7-14 days. There is a possibility (only theoretical!) of the appearance of testicular atrophy, increased blood pressure, and an increase in cholesterol, which is harmful. However, the practice has not recorded these side reactions in athletes' bodies. If there is a large overdose, the appearance of too much excitability or aggression is possible.

Prima-Med, which has an injection form, differs from the vast majority of anabolics in that it almost does not increase blood pressure in the arteries. And it also does not raise harmful cholesterol. Contraindications to the use of this steroid are during pregnancy and the lactation period. But it should be remembered that before starting a course of taking Prima-Med or other similar preparations, it is necessary to consult a doctor.

Opinions of athletes about Primobolan

Professional sportsmen are very reserved about Primobolan. Prima-Med is almost not used as a solo course because they consider that it does not give a very noticeable result.

Most often, athletes share their opinion about this preparation, using it in combination with other anabolics. Athletes value Primobolan for its ability to preserve muscle mass and improve muscle relief.