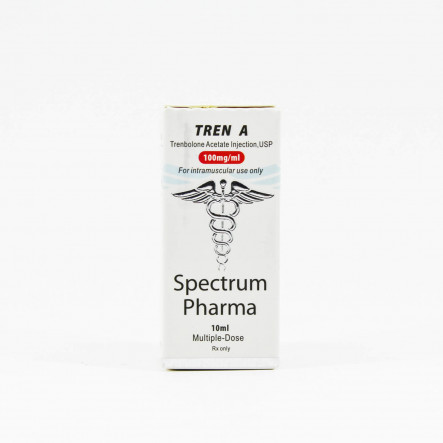 Tren A (Trenbolone acetate) is a powerful anabolic and androgen, very effective in gaining mass, which has been proven for several decades. This makes the drug very popular among representatives of power sports.

The active ingredient in Trenbolone Acetate is trenbolone acetate. It exceeds the natural male hormone in terms of anabolic indicators by five times. This makes the drug as effective as possible if it is necessary to increase strength indicators.

Trenbolone Acetate also has a powerful androgenic effect, which is twice that of testosterone. The half-life of the substance is from one to three days. Today it is very easy to buy trenbolone acetate and no prescription is required.

An important feature of the drug is the rapid onset of work after administration to the body. Also, it is quickly displayed, which makes it possible to use it before the competition.

Tren A (Trenbolone Acetate) accelerates the synthesis of somatotropin and insulin-like growth factor-1, which is necessary for burning excess subcutaneous fat deposits. Speaking about the drug, one cannot help but recall its anti-catabolic properties, which are associated with the ability to reduce the synthesis of the stress hormone - cortisol. All these words are fully confirmed by trenbolone acetate reviews.

Let's highlight the main effects of this steroid:

Most often, the trenbolone acetate cycle is carried out by athletes to increase strength and gain lean muscle mass. The drug can be used alone, but maximum effectiveness can be achieved when combined with various AAS. The average dosages of TREN A are in the range of 50 to 100 milligrams administered once every two days.

If you are faced with the task of gaining quality mass and increasing strength, then it is best to combine TRENOL-100 with testosterone esters, stanozolol. For maximum muscle gain, the optimal combinations are Sustanon, Stanozolol, and Turinabol. The average duration of cycles involving the drug is about eight weeks.

PCT after TREN A Therapy

If used for more than eight weeks, you will need to use gonadotropin. Thanks to this drug, you will be able to quickly restore the HH axis.

You will need antiestrogens if aromatizing steroids, such as male hormone esters, are included in the course. Directly during rehabilitation therapy, you need to use tamoxifen or Clomid. The technique of their use is standard, as well as the duration of recovery - from two to three weeks.