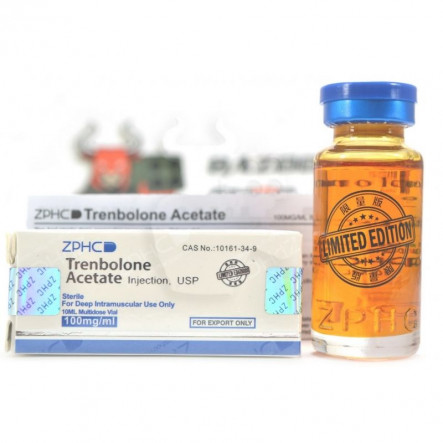 Trenbolone acetate has quick action and a half-life, which makes it necessary to do frequent injections (every day at a dose of 50 mg)), however, He is recovering faster than the rest of the ethers.

Tren A is a steroid with anabolic and androgenic activity and is produced in the form of an oily solution. The drug does not aromatize and is one of the most powerful drugs compared with analogs. The activity of the drug is 3 days, does not retain fluid in the body and it can be detected within 7 weeks from the end of the drug.

The main properties of the drug are:

The dosage of the drug is 50-100 mg every other day. The duration of the course should be no more than 8 weeks. With a longer intake and higher dosage the risk of side effects increases. After taking Trenbolone Acetate it is necessary to undergo PCT using Toremifene, 60 mg per day for 3 weeks. Clomiphene citrate or Tamoxifen can also be used on PCT.

Side Effects of Trenbolone Acetate

In addition to the positive effect of the drug can lead to unpleasant effects, such as aggressiveness, problems with sleep and skin, and increased blood pressure. The drug can also harm the production of testosterone by the body. For women, the use of the drug is contraindicated, since it increases the risk of masculinization and virilization.

Most professional athletes positively characterize the effects of taking the drug. They write in reviews that the drug is effective, and almost harmless while respecting the individual size of the drug dosage and recommendations for its administration.