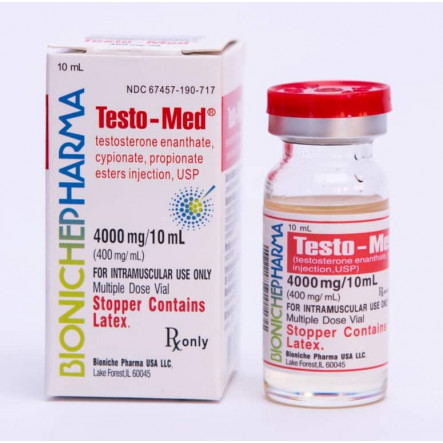 Testo-Med increases the production of the male hormone, as a result of which a large amount of protein is produced and increased muscle growth occurs. The advantage is that a small dose of the drug, one injection of 400mg/ml, will not cause any negative consequences.

This type of steroid is another drug from the company Bioniche Pharma. The active substance is a combination of mixtures of testosterone, which includes various esters. Examples, such as propionate, testosterone cypionate, and enanthate. Because of this, the drug should be used solo. It will cost a lot less than buying a bunch of other steroids and injecting them in the correct sequence. You can buy Testo-Med (Testosterone Mix) in SlimCat Pharmacy.

Although the body itself successfully produces testosterone, it is not enough for professional athletes, which is why many resorts to steroids.

After using this drug, the following changes were noticed:

First, it should be remembered that steroids should not be used by persons under 18 years of age. Testo-Med is no exception. It can have an extremely negative effect on the still unformed body of a teenager.

Secondly, if you want to build muscle mass, you should inject once a week. The dosage in this case is 250-500 mg. If the dose is increased, estrogen levels may increase. From the second week of taking the drug, aromatase blockers should be added. They will control the decrease in estrogen in the blood.

Thirdly, it is worth injecting the drug only into the gluteal region. If Testo-Mix is administered elsewhere, a rash or other adverse effects may occur.

Fourthly, after the course of application has ended, after 21 days you should undergo post-cycle therapy, which will allow you to level your testosterone levels. In this case, it is necessary to use various supplements and sports nutrition, which increases muscle growth, or Tamoxifen, which reduces or cancels estrogen levels.

Testo-Med is best-used solo while using only sports supplements that are aimed at developing muscles. But to achieve effectiveness, you can add a course of other drugs to them. For example, for the texture of the body, Testo-Mix is combined with Winstrol, and if you just want to gain as many muscles as possible, then with Nandrolone. But it should be remembered that if all these drugs are used incorrectly or if the dosage is exceeded, negative consequences can occur that will cause a lot of inconveniences.

Negative consequences of the use of the drug

This type of steroid is the same in composition as many other hormones, so the side effects will not differ much. First of all, when using Testo-Med, there is a possibility of an increase in body weight if little attention is paid to physical training. Puffiness, which appears due to an excess of hormones. Suppressing your testosterone can also lead to negative consequences. For this, it is necessary to undergo therapy after a course of administration. The mammary gland may increase, which will again lead to the appearance of significant excess weight.

But to prevent many negative consequences, you should also take sports nutrition and various food supplements along with Testo-Med, this minimizes the negative impact on the body. To all this, one should not forget about daily physical activity. Pay more attention to cardio.

Drugs that reduce the level of estrogen in the blood should be taken after the completion of the course, but not in conjunction with Testosterone Mix, otherwise, everything that the drug will produce will immediately decrease. And there will be no result.

If you need to increase the duration of the course, which the manufacturer does not recommend doing, to reduce the risk of negative manifestations, for example, a decrease in the level of endogenous testosterone, you should also use gonadotropin along with the main drug.

If we consider customer reviews about the product, then we should notice the ambiguity of statements. Some believe that Testo-Med does its job perfectly, muscle growth increases, the body becomes more prominent, and there is no negative effect at all if everything is done according to the recommendations. At the same time, many write that this drug does not burn excess fat at all, and you become just large, with large muscles under the fat layer.

It should also be clarified that after Test Mix, as after many other steroids, there is a slight rollback. To minimize it, continue to use sports nutrition and various food supplements.