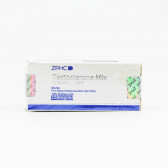 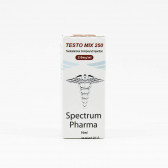 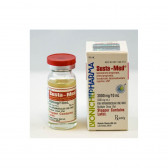 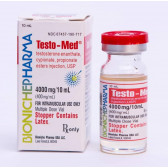 America is the “homeland” of professional bodybuilding, it was in the USA that a mixture of various forms of testosterone called Sustanon 250 was first released, and the company Organon was involved in the creation of this drug. But initially, the idea of creating a mixture had nothing to do with the sports industry. Sustanon was created solely for therapeutic purposes for people with a lack of testosterone produced by the body. And only after a while, he began to be popular with athletes.

The main composition of the drug includes 4 testosterone esters, such as propionate, phenylpropionate, isocaproate, and decanoate. Sustanon is able to maintain the concentration of the hormone in the body at a constant level for a month. This remarkable ability is associated with a different dissolution rate of the esters mentioned above, and this is a really necessary ability because due to its number of injections it decreases significantly, but in quality, it is not inferior to those types of testosterone that are administered separately. The only disadvantage of such a complex injection is the price, it exceeds the cost of the components sold "solo". You can buy Sustanon in SlimCat Pharmacy through our website.

Consider the processes that occur in the body when a steroid is administered:

Taking Sustanon, the athlete will notice a clear increase in muscle mass, which, in turn, will cause an increase in actual strength. Another rather important indicator is an increase in endurance, this will happen due to blood saturation and an increase in its mass. Secondary results of the injection will also appear, such as increased appetite, increased libido, and suppression of catabolic processes occurring in the body.

Taking this drug is not recommended for persons under the age of majority, as well as people with any health problems. The course of Sustanon injection varies from 6 to 8 weeks, depending on the desired result, if necessary, an extension of the period is carried out, and gonadotropin should be added to the course. In order for the concentration of the hormone in your body to remain unchanged, inject weekly, injecting a volume of 250-500 milligrams.

After a week has passed from the day of the initial injection, it is necessary to include aromatase inhibitors in your “diet”, and by the end of the term, in 1-2 weeks, it is necessary to remove them. Approximately 3 weeks after the end of the course of taking the Sustanon (Testosterone Mix) in the body, the process of producing its own testosterone will begin, which will end a month after the start of this process.

For those who do not believe in the effect of taking Sustanon alone, components have been developed that can be taken together. For example, for a quick set of muscle mass, you can “connect” Nandrolone or Turinabol to the course, and while creating a “relief” of the body, Winstrol is best suited. Using these "cocktails" of drugs, you will achieve the desired result faster, and the likelihood of negative reactions in the body will also decrease.

Side effects associated with taking Sustanon

Sustanon, like other forms of testosterone, does not exclude the possibility of estrogen. There is a possibility that edema may appear, and gynecomastia may also form. But all such changes are very easy to prevent, it is enough time, according to the instructions, to start taking aromatase inhibitors. The worst disease that can develop is testicular atrophy, but this is also a manageable process. It is enough to limit the time of taking Sustanon to 8 weeks, well, it is necessary to take antiestrogens.

The negative reviews associated with taking Sustanon fall into two categories. First, there is the problem of the appearance of infiltrates - seals in places where the drug was injected. But everyone who faced such a problem noticed that these “bumps” disappeared in a period of 2-5 weeks. And the second category of problems that appeared after taking Sustanon is associated with the appearance of unwanted subcutaneous fat in athletes along with muscle mass.